JORGE MARIN: The Body As A Landscape

EXCERPTS FROM THE FOREWORD OF THE MEXICAN WRITER

An alloy of copper and tin, bronze is a mixed metal. It is significant then that Jorge Marín uses bronze, works with it, as though it were the metal of our race, of our mestizo country. After all, we used to be referred to as “the bronze race.” Jorge Marín’s bronze art doesn’t so much lose this Mexican connotation as transcend it.

Marín gives wings to bronze sculpture: angel wings. His bronze angels are not outside of religious tradition. Angels appear in all belief systems. There are Jewish, Christian, and Muslim angels. Their population can be derived from astrology or passed down from Middle-Eastern monarchies: four, seven, twelve? The word angel is derived from the Greek word for

The creations of Jorge Marín follow this command, which in his case is not divine, but “human, all too human.”

His angel-centaurs, unique in our iconography, are proof of this. Winged horses, woman-kidnapping horses who are condemned to exile in the moun- tains, from where they have descended, thanks to the works of Jorge Marín, to encounter those other perilous creatures, the sirens who tried to seduce Odysseus with song on his way home from Troy, forcing him to seal the ears of his sailors, rather like Orpheus had done in the saga of the Argonauts, defeating the sirens with his superior song.

* © NOT TO BE COPIED IN WHOLE OR PART

1982 B.A. in Art Restoration and Curatorship. National School of Restoration, Curatorship and Museology – National Institute of Anthropology and History/ Ministry of Education of Mexico. 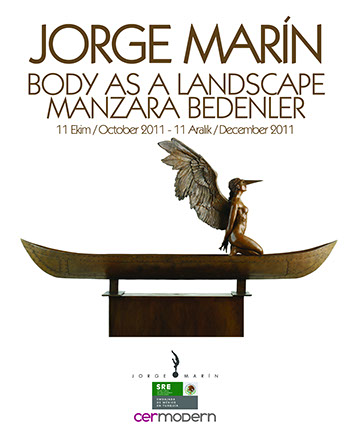